Canadian Credit Karma members with student loans carry tens of thousands of dollars in student loan debt on average. But it’s impacting millennials the most — with those in certain provinces, territories and metro areas carrying the most debt.
Written by:

The offers that appear on our platform are from third party advertisers from which Credit Karma receives compensation. This compensation may impact how and where products appear on this site (including, for example, the order in which they appear). It is this compensation that enables Credit Karma to provide you with services like free access to your credit score and report. Credit Karma strives to provide a wide array of offers for our members, but our offers do not represent all financial services companies or products.

Canadian Credit Karma members with student loan debt owe more than $17,000 on average, with total debt varying by region, city and age, according to a recent Credit Karma analysis.

Residents of the metro areas of Toronto and Vancouver face more than $20,000 in student loan debt on average — almost twice as much as those in Manitoba, the region with the lowest student loan debt among members, our analysis found. (Learn about our methodology.)

We also found that Canadian millennials in particular are impacted by student loan debt, which shows that, as in the U.S., the effects of student loans can linger long after graduation.

But even student loan debt balances in the tens of thousands can be manageable. We provide some tips below to help you manage your payments. But first, let’s take a look at what student loan debt looks like among members across the Great White North. 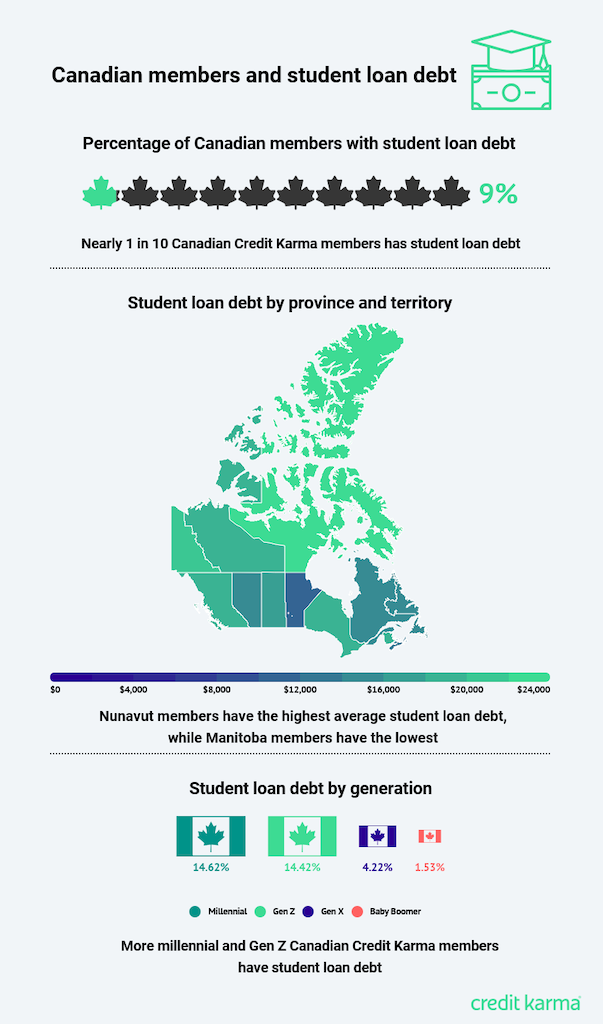 Areas with the highest and lowest average student loan debt

While it has the highest average student loan debt among Canadian Credit Karma members, there’s also some good news coming out of Nunavut. On average, Credit Karma members there have paid off more of their balances than any other region except the Northwest Territories.

Student loan debt doesn’t have to drive you crazy. We’ve got some tips on how to manage your monthly payments below.

If your monthly student loan payment is more than you can afford, you may have options to renegotiate the terms or apply for a Repayment Assistance Plan. You can find out more about your repayment options at the National Student Loans Service Centre.

If you have an online account with the NSLSC, you can use the Customize Payment Terms tool to see how different repayment amounts might impact your loan. Then, if you find an adjustment that fits your budget, you can request a Revision of Terms.

Give yourself extra time each month

If your monthly student loan bill is due within the few days before you get your paycheck, it can feel more difficult to make that payment, since you could already be strapped for cash at that point in your pay cycle. If you have an account with the NSLSC, consider requesting a change of your payment due date through your NSLSC online portal so that you can switch to a date that’s more convenient for your budget.

If you have more than one student loan, keeping track of them could be tough. Consolidating multiple student loans into a single consolidated loan may make the repayment process simpler.

Editorial Note: Credit Karma receives compensation from third-party advertisers, but that doesn’t affect our editors' opinions. Our marketing partners don’t review, approve or endorse our editorial content. It’s accurate to the best of our knowledge when it’s posted.

Costs keep two-thirds of Canadians from achieving their New...

More than a third of Canadian millennials expect to...

Canadians fear debt almost as much as death, survey...

Canada’s end-of-summer car-buying spike could be near: Tips to...

What is a credit-builder loan?

What are secured credit cards?